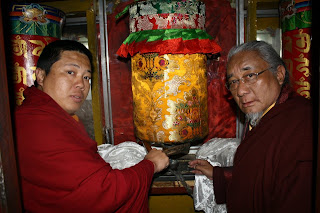 The Florida Drikung Dzogchen Community (DDC) was founded in Tallahassee, Florida, in 2001 by Drikung Ontul Rinpoche.  The Florida DDC is part of Ontul Rinpoche's world-wide community of sanghas devoted to supporting his transmission of the Drikung dzogchen across the world.  The Florida DDC hopes to make the teachings of the Drikung dzogchen available to interested practitioners throughout the Southeastern portion of the United States and beyond.

It is Ontul Rinpoche's intentions to transmit these teachings throughout the various Drikung Dzogchen Communities through a series of ten or more teaching retreats offered every other year.  In addition to his teachings at the various DDCs, Ontul Rinpoche offers practice retreats at his monastery, Wogmin Thubten Shedrup Ling, at the holy "Lotus Lake" Tso Pema in Rewalsar, India.  To support students of these teachings, the associated texts are in the process of being translated, and many of the teachings on these practices are being recorded in DVD and CD format.

To date, the following Drikung dzogchen teachings have been offered at the Florida DDC: