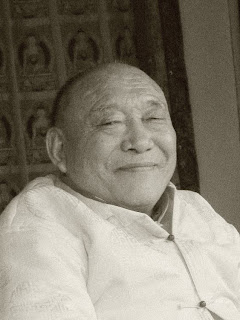 Lama Wangdor Rinpoche will be visiting the Florida Drikung Dzogchen Community for the second time, Monday 20 April and Tuesday 20 April 2009.

The Golden Letters by John Myrdhin Reynolds and The Lion's Gaze by Khenchen Khenpo Palden Sherab Rinpoche include commentaries on this text, including Patrul Rinpoche's The Special Teaching of the Wise and Glorious King.

For more information about Lama Wangdor Rinpoche and his translator Lama Yeshe Katyup.

Please preregister by email. All teachings are at 1103 Hays Street, Tallahassee, FL, 32301.

The teaching schedule:
Wangdor Rimpoche is a Tibetan Buddhist monk and teacher (lama). Through decades of solitary meditation, retreats and practices he has achieved the state which Buddhists call realization and is respected worldwide as a venerable teacher and a master of "Direct Mind Perception" (Dzogchen) Meditation. Lama Wangdor has a profound commitment to making Buddhist philosophy and teachings accessible to everyone with a sincere interest. He has taught and given empowerments in Asia, Europe and the United States over the past two decades.

He has spent more than 30 years meditating in the caves first used by the Tibetan saint, Padmasambava, above Lotus Lake (Tsol Pema) in the Himachal Pradesh region of Northern India. In solitary retreat during the early years, he was eventually joined over time by more than 50 cave-dwelling yogis and yoginis who look to him for guidance and support. Beginning in the 1970s, he constructed a monastery near the lake as well as a retreat center on the mountain, available to practitioners of all lineages and nationalities, projects which have taken nearly 20 years to complete.

Wangdor Rimpoche holds both Nyingma and Kagyu Dzogchen/Chagchen lineages and is considered a Remay (ecclectic) teacher. He teaches from heart texts on Dzogchen, the maha-ati and mahamudra yogas which he has received in lineage from Nambla Janchub Dorje, Kunu Rimpoche and Scholars Chonchok Sumon Khenpo of Trungpa Rimpoche's line; Tucksie Rimpoche and Pumdong Key Rimpoche.